We’re running out of time. By 2050 the world’s population will likely be close to 10 billion people. As it stands, with the amount of food production available right now, we aren’t even making enough to feed half that number. And we could be, that’s the issue. Dietary restrictions, availability, and distance from production is what keeps people hungry around the world.

In less developed countries and areas, people eat whatever they grow and cooperate to survive off of whatever farming they can handle. As incomes grow and options open, people will seek out new and different food to eat instead. They’ll choose things they couldn’t have before, like meat, and begin driving up demand to be supplied.

The problem with global food supplies isn’t simply a matter of responsibility on the industry’s part. They’re doing everything they can, in fact, to make as much meat as possible. The problem is how much meat is being made compared to how much people need it. It’s about wants, not needs.

On average, the daily recommended intake of protein from animal OR plant based sources -it’s all just protein in the end- is about 56 grams. That’s not a lot. There are cereals that can provide that now. In much the way fats were demonized through advertisement and marketing, protein has been made into a golden standard of necessary living.

People in the US and Canada eat almost double the recommended intake of protein per day and more than half of it comes from animal based sources. Meanwhile, in places like India and Eastern Asia, they come much closer to the recommended limit and are less reliant, or wanting, to do so with meat based protein.

There is a correlation to be made with a country’s affluence and its consumption of meat. The more prosperous a country becomes, the wider it’s availability of food becomes as well. Importation makes foreign-grown foods more available and regions that can’t raise their own beef or chicken can have it shipped in to eat just like the other countries get to have.

A problem which stems from all of this is the production cost of it all. Especially beef, all meat-based produce is more resource-intensive, expensive and wasteful. When compared to the available plant proteins that can be grown and distributed, the process for raising livestock for meat is an extreme degree worse for the planet.

That leaves a crossroad of conflicts that all merge together. We’re running out of resources to farm with in a way that fulfills all of the wants and needs of the people around the world. We’re also running out of ways to reliably reach and feed all of those people. As the world population continues to trend upward and the calorie-requirements for each country continue to increase and change in nature, we collectively can’t handle it all.

One quarter of Earth’s land is used for pastures in farming. One third of all fresh water is dedicated to agriculture. And for both of those figures, nearly a third each goes to raising cattle. Despite the fact that the ratio of calories that cows consume to the amount of protein they can offer as food is among the lowest of all possible options for raising protein, cattle have the majority share of the Earth’s resources as a food.

That, in turn, would make beef the cheapest and easiest to purchase across the world, since it’s in such constant demand that it is over produced, but even then there are places and groups of people who can’t afford even a pound of ground beef. Their options are limited by their budget, which restricts their choices incidentally toward the more calorie-efficient and safer options of food.

Everything trends to an uncomfortable reality where we might not have beef to eat in the future, and a sudden stop like that could instigate major social upheavals. Taking choice away from people is a terrible way to instigate change, even for the better. What needs to happen for meat farming to become sustainable, as it is not right now, is simple reduction, and that task lies with consumers.

Specialty diets that call for high protein intake, such as the paleo diet or the popular ketogenic diet, are still in an upswing of usage. Many people in developed countries have diets that require more than they really need in terms of meat and protein. If they reduced their intake by just small amounts per day, it would result in a massive impact on a wide scale.

Not everyone can be sold on the idea of giving up meat to fulfill a wider social goal. Forcing ideals onto others to change them just isn’t how change works. We’ve been hearing the “starving children in Africa” narrative so much, that for as true and terrible as it is, it’s just background noise without meaning anymore.

In order for meat to become sustainable, society has to change its desire for meat and reduce consumption. Not outright stop, either, it just has to be reigned in a lot more. Reducing production and increasing price might work as a stop-gap but in free markets it would invite other companies to drive competition with lower prices, driving demand up higher and making the problem worse.

It’s also not helpful at all with how much meat gets wasted. Almost a third of all meat produced gets thrown away before it can ever be consumed. The result is constant losses for the companies involved, pollution from the discarded meat into landfills, methane emissions that create greenhouse gases; the system is broken from the bottom to the top.

The goal of sustainability is to continue using it without incurring the massive losses associated with creation. A very simple, underspoken solution for preserving meat is freezing. It doesn’t allow the meat to stay viable forever, but it’s better than just throwing it away into a landfill. Freezing and storing excess quantities of meat at an industrial level could create food stores that would last years and save resources on future meat production, allowing for a period of recovery in the farming sector. 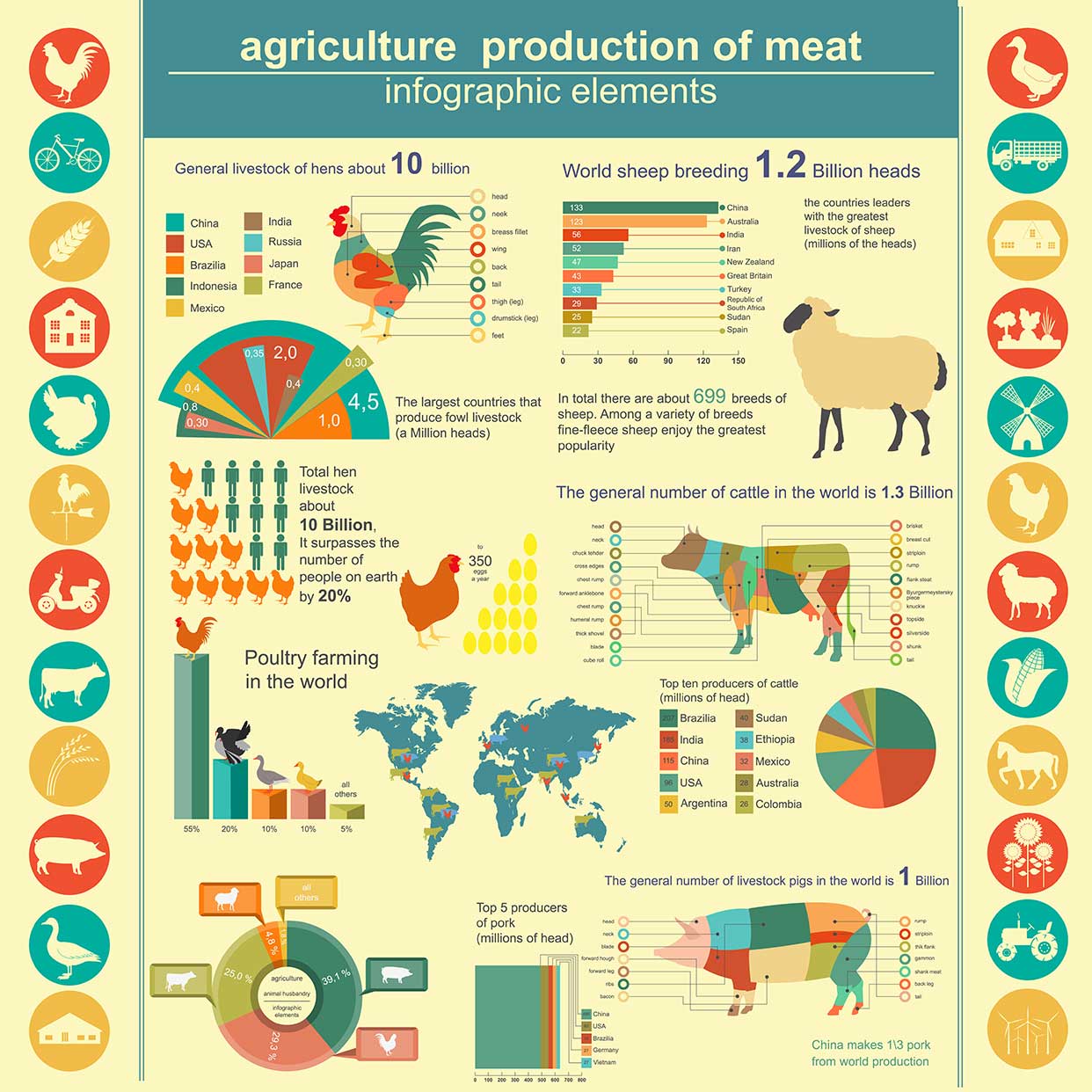 That would solve the problem of having so much meat that we can’t eat it all. Mass distribution or altering prices based on supply first and demand second could also work in certain command economy structures. If a country has more meat than its citizens can eat, exporting it to countries less fortunate just to get rid of it for cheap can also spread the distribution around and fulfill wants without the presence of major developmental changes.

The only real solution continues to come back to the root of the problem. The supply and demand. Consumer driven production. People want it, so companies make it and exchange money for goods and services. As long as people want meat, it will be farmed, and it will never be perfectly sustainable.

It just takes a little less wanting to do the whole world some good. If diets can shift to a state where less meat-based proteins are accepted, where large-scale stigmas against vegetarian and vegan alternatives are common, then people can broaden their diets and gain more choices for their daily needs.

Guiding the hands of people away from meat, especially beef, should become a priority for the environmentally conscious. Not by force or coercion, but with facts. Let them know the numbers, how much sodium is also in their favorite burger, or how many proteins their steak has compared to your half-cup of soybeans. Telling people they could save money without impacting their own life is the surest way to start changing minds.

Until then, there is always the certifiable scare tactic. There will come a day in the future, and sooner than we may expect, where meat production has to stop. It won’t be a revolution of social change or a new vegan world order. It’ll be a global dustbowl where nothing grows, everything dies, water dries up and those who are left have to decide if they eat beans or feed the beans to a cow so they can sate their starving bellies with one last burger before they die. That’s a future we could still live to see, all because we chose beef over sanity.