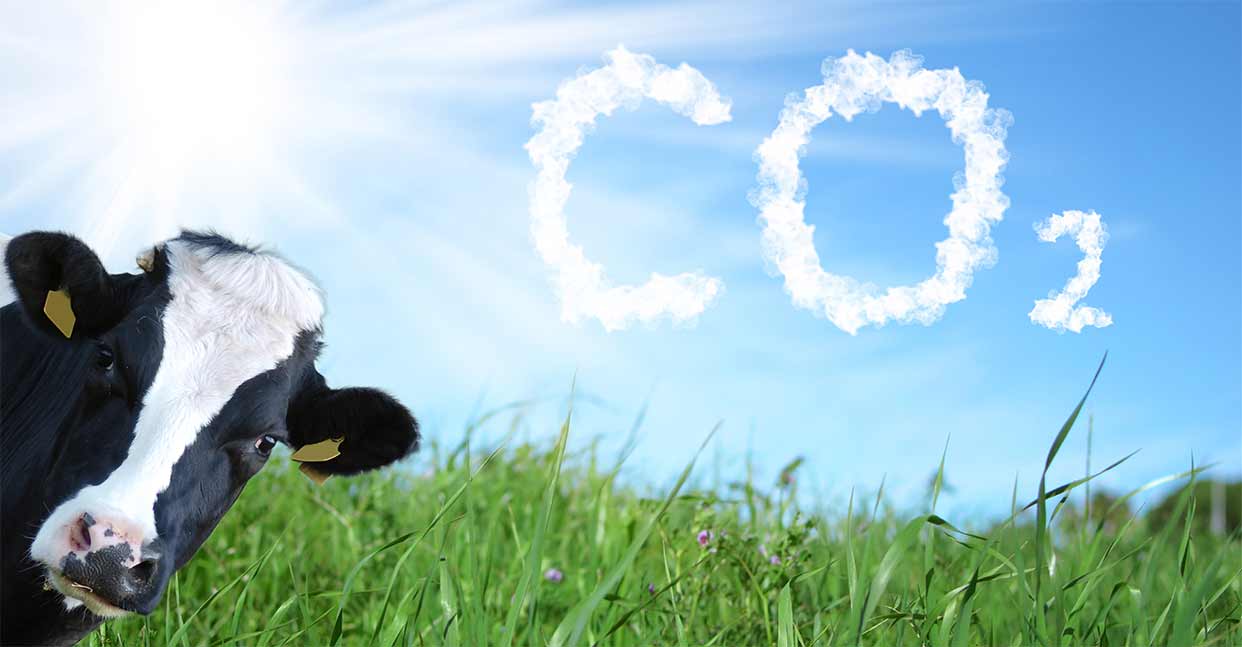 How meat contributes to global warming

Imagine, for a moment, an open field. Full of grass and flowers and all kinds of life. Surrounding it is a small forest that stretches out much farther into the mountains. The land is undeveloped and clean. All that exists there is nature.

And part of nature are animals, but in small, controlled amounts. Grass grows, and animals eat it, then other animals eat those animals, and then they die and their bodies decompose back to the earth. The natural cycle, as it is, can reach a balance where the rest of nature isn’t threatened.

However, domestication of animals for labor and especially for food has always been a problem. When there are too many animals eating grass and not enough animals to eat them, or none at all in a natural state, then there will be less grass. Less vegetation in general. Less life to the ground and in nature. There will be more animals, but if they don’t keep eating they’ll die anyway, so they will always continue to eat.

So what’s the solution to an overwhelming number of ruminant animals? More grass. Faster growing grass. Fertilization and irrigation. Two factors that tie into the total sum of global warming.

Out of all the most significant pollutants to the environment and creation of greenhouse gasses which compound the global warming effect, agriculture takes a second place far beneath the consumption of fossil fuels. However, when the factor of agricultural industry and the mass transportation of the already environmentally costly produce is considered, the gap between the two narrows slightly.

Raising livestock for meat is immensely inefficient. Especially cows. It’s estimated that under modern field-based farming techniques, cattle requires the highest amount of land, fertilizer and water to sustain and produce than any pound-for-pound alternatives like pigs and especially chickens.

Compared to all of those, agriculture centered around vegetables has the highest efficiency from labor, resource and pound-for-pound pricing standpoint. Growing crops for humans to eat is simpler than growing crops for animals to eat, which humans then eat.

The primary pollutants of agriculture are Methane from cows and the fermented materials of manure to fuel the growth of grazing fields and Nitrous Oxide found in the overworked soils that seeps into ground water and evaporates into the air.

Although those pollutants are more “natural” than others, they still contribute to changes in the environment which then go on to affect the climate. The excess of methane as a greenhouse gas can cause toxic conditions and even result in acid rain. Cows and other animals spread these poisonous gases freely as they graze in the form of gastric reactions with the grass they eat. Even though it’s natural, in too many numbers, it’s dangerous.

Many studies that quote the numbers associated with toxic gas emissions from farmlands also don’t account for more historical contexts of where those pastures were established. Deforestation is still a practiced method in many countries to make room for more farms.

They aren’t willing to establish farms in already cleared out flatlands or hillsides without tree growth because that land just isn’t enough. They need it wide, flatter and more grassy to maintain a full herd of grazing cow that will never run out of grass to eat, which causes the overworking of the soil, and the overfeeding of the cattle.

While beef is the biggest contributor to the agricultural problem with meat production, no other facet of the industry is safe from blame. All animal farming undergoes some level of enclosure, processing, and industrialization which leads to pollution. Spare parts from chickens and pigs that don’t go to any slaughter house or butcher are disposed of in machines which require fossil fuels to operate. Everything else is shipped in freight trucks over the road or over rail, where the pollution continues.

Even down to the most basic level, to the consumer-side of the cycle, meat is naturally pollutant in micro-environmental amounts. The cost of fuel to produce one butcher-ready pig is already high, but then there’s preparation and execution. Smoking, deep-frying, an overabundance of electricity which in turn requires fossil fuel to create.

No matter what solution to ethical farming or ranching is reached in the means of meat production, it will cause the majority of agricultural pollution. Removing trees, overpopulating concentrated areas with cows and the sustained amount of power required to maintain and operate the facilities for producing meat is a burden on the planet.

But, > what is the solution? If there even is one. Meat is popular for many people, and although plant-alternatives are beginning to enter consumer spaces there are those who refuse to substitute their farm-grown beef and chicken.

There’s a tricky line that must be towed when considering the land usage as the main problem. If farms continue expanding and take up more land, the deforestation will continue, and the loss of trees will contribute to the inability to process the excessive carbon dioxide in the atmosphere that is leading to a global climate shift.

However, reducing the land would only encourage factory farming, a state where cows are physically mistreated in cramped locations which would not alleviate their own gaseous problems. Maintaining a totally indoors farm would also create a multitude of power hosting problems and a reliance on fossil fuels for heating, air conditioning, and other functions that would necessitate its operation.

Solutions to over-farming are hard to approach. Most of this destructive farming is handled by developed countries that can afford to develop the land quickly and cheaply. Less fortunate, and underfed, countries don’t have access to the capital required to sustain large scale modern farms, and rely on more tribal and domestic types of farming for their meat, or importation.

However, due to these restrictions, some farmland in less developed countries has incorporated forestland into the pasture landscapes, avoiding the issue of deforestation, which also keeps the soil from depleting and give a more natural yield to the grass.

Although the effects of climate change from beef farming aren’t as major as the vast majority of sources, which are fossil fuels, it still can’t be ignored, and any thing that can go to averting global climate disaster should be considered and worked toward.

The easiest solution lies in the heart of the consumer, the final link in the chain of production. If less meat were eaten, less farm development would be needed. Farmland purposed for cows could easily be reintegrated as vegetable or fruit farming, which is less intrusive to nature and more productive in terms of energy efficiency.

The problem there is managing wants and needs. In many ways, beef is seen as cheaper and more readily available than other, healthier options for consumers. They’d rather buy the $2 burger that costs hundreds of burnt trees to make than the equally nutritious serving of lentils or beans because the burger is there waiting for them, already made by fast food franchises.

Even the plant-based alternatives, the Beyond Burger and other variations of the meat-flavored substitutes which have been around for years already, aren’t without their problems. And even so, most people will see it as too different, or misbelieve an exaggerated statistic. Changing minds has to happen or changing land regulations won’t do any good. If people want meat, then it must be grown.

There is also the ethical consideration of the animals themselves. In small numbers, on sustainable land or across naturally occuring pastures, cow farming is not harmful. The number of cows in developed countries on dedicated land that is cleared and altered for them to thrive is the root of many other problems.

It’s not quite as easy as just stopping all beef production because the cows will still exist. The same is true for other kinds of livestock. Pigs, chickens, goats and lambs - they are living animals that have been domesticated over generations of selective breeding to require living in a specific way.

Pigs released to the wild forests won’t rapidly adapt. The standard American beef cow has no real homeland anymore but the farm. Same with chickens. If the animals return to the wild they will only know their caged ways and fail to survive on their own after long.

Sending multiple species to a coordinated genocide just to cut down on production is too cruel of a solution to consider, and it would bring up another side effect, that of the thriving predator population. If wolves eat well, they’ll thrive, and more wolves means more problems across a much larger area.

The environment takes hits from many angles, even ones found in nature. Volcanic reactions spew metric tons of ash and polluting gases into the sky while mankind continues to drive industries that imitate that process with none of the natural benefit of replacing soil with rich, volcanic runoff or land formation.

It’s often been brought up that farting cows are killing the planet. The exaggeration in that statement does underlie a much more present issue. Cows and other animals will produce methane naturally, and that gas will find its place in nature. But where there’s too many of them, and too much gas to fit into the natural cycle of the planet’s chemistry is where the balance shifts towards destruction.